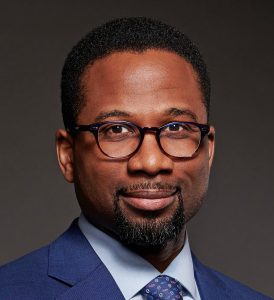 Shundrawn Thomas, president of $1.1 trillion Northern Trust Asset Management, has been writing letters to the industry calling for more accountability in diversity and leadership. In Part 1 of this series, taken from an edited interview with Thomas, he explained his reasons for writing them and called for more empathy. In Part 2, we discuss how minorities have a mantle of responsibility on their shoulders when they come into positions of power, and how women and minorities can create positive mentoring relationships.

In the earliest stage of the pandemic, Thomas penned an open letter to business and civic leaders issuing an urgent call for more compassionate leadership. In particular, he emphasized the unequal toll exacted on marginalized communities and the responsibility of leaders to respond in word and deed.

In the aftermath of the killing of George Floyd, Thomas authored three more deeply personal open letters addressing systemic racism, encouraging readers to transform the current social justice moment into a sustainable movement, and advocating for them to break their silence.

In this series (taken from an edited interview with CIO managing editor Christine Giordano), Thomas continues to outline what he’s been up to, lay out a path for the years to come, and explore how he hopes to add diversity to the finance community, as well as other areas of society.

Christine Giordano: In your second letter, titled “Breaking the Silence” you regard it as an obligation for prominent Black professionals like yourself to carry the mantle for other people of color who don’t have a platform to speak on serious social issues. But can you also give us a better understanding of how you got to your current position for the benefit of others who would like to follow your path?

Shundrawn Thomas: I’ll start with the second part of your question, because it will tie to the responsibility. I developed an interest in the capital markets while I was an undergraduate at Florida A&M University. I thought I would be an accountant; I was studying accounting, in which I earned a degree. I got introduced to investing through an investment company that we had at Florida A&M, and, from there, pursued that field.

I was very fortunate to have mentors and individuals who took a vested interest in my career success early on. Diligence is important in one’s career. Also, choosing something that aligns well with your natural inclination and skills certainly helps. That was important for me and worked out well.

At various points, I was able to have opportunities that accelerated my career, ultimately to move into management and leadership positions in the financial services industry, specifically in the area of the capital markets and investing.

It doesn’t happen by accident. It happens on purpose. A lot of people say that success is just about individual effort—I know better than that. And so I talk about those mentors and sponsors, but I also think about the tremendous people over the years who sacrificed their lives, [such as] Dr. Martin Luther King Jr. If there weren’t people that were speaking out and raising their voices and really advocating for equality and opportunity, would I have even had it in the same way?

It’s still challenging, but it’s better today because of those efforts, so I absolutely think I have an affirmative responsibility, given the privilege that I have, the role that I have, the opportunities that I have, to do a couple of things: First, I have to serve as a truth teller. That might sound simple, but truth is not as easy to come by as one might think. I somewhat sheepishly say, with difficult topics, people would almost rather have fantasy.

Second, I can also be a translator, as I belong to many communities: I’m an African American but I’ve moved from a low socio-economic status to a higher one. My wife would be considered Black and Hispanic; her family’s from Panama. We are connected to so many communities, and in that connectedness we can translate.

But the important thing that we can also do is be bridge builders. If I sit in that space—whether it is always comfortable or not—I do see it as a responsibility to use the opportunity, the relationships, and the platform that I have to hopefully create positive influence.

CG: We’ve been running an Op-Ed series in which we reach out to diverse people or people building diversity and we ask them, “What worked for you? What works for the industry? Or how have you added diversity into your teams, into your methods, and how have you used resources available to you to advance your career, even though you faced systemic racism?” And over and over again, I hear “mentorship.”

So what would be your advice to someone who wanted to reach across, let’s say, “the great divide of race” and mentor someone who they saw had potential?

ST: Let me start with this. I share this with people because it’s so important. During the earlier part of my career, I worked for two different Wall Street firms. From where I grew up, Wall Street could have been a universe away. So it’s not just about having the intellect (you don’t get there without having the intellect), it’s also being able to understand how to comport oneself and navigate the culture. And that’s not in a book.

I think about my foremost early mentors there: one white woman and two white men. Now let me be clear, over the course of my career, I’ve been blessed to also have mentors of color, specifically successful African Americans.

But I think it’s very important that I call out the point about white mentors I’ve had. Because 1: I believe you must have diverse mentors, people who don’t necessarily share your background, and 2: I want to affirm that there are people that are willing to do it.

Now, how does it happen? First of all [for mentees]: A mentoring relationship is a teaching relationship, so you must, in a sense, make yourself accessible.

I find, sometimes, people from underrepresented backgrounds, the mindset is to work hard, but they’re not necessarily available and accessible from a relational standpoint.

I think the second thing is, you have to be teachable or coachable. If it’s a mentoring relationship, the mentor will want to know that you value that coaching, that mentorship, that instruction, that in a sense, you put it into practice. And so if you don’t have humility, if you’re not teachable and coachable, you won’t find mentors.

On the other side, [for mentors], for those who are established, maybe if you’re in the majority, for example, if you’re a very influential white male: just be really cognizant of the fact that there are talented people who may be in your circles or in your organizations who are not necessarily going to be naturally part of your networks.

They may not live in your community or belong to your club or those things. So you need to make the extra effort to make yourself available to intentionally connect with people who don’t share your background or your alma mater or your prominent interest in your free time

CG: I hear some pushback from women on this because, oftentimes, they’re a victim of the optics of an older gentleman taking a younger woman under their wing. Could you address that as well?

ST: Yes, so let’s be clear, the “isms” exist. We talked about racism, but sexism is also a real thing. And it has not left the proverbial building, and so, certainly, there are concerns that are unique to women that they must think about in any organization.

What I would say is this, though: I started from the place that there are well-intentioned, good-natured people in the vast majority of organizations. And to the extent that you don’t believe that’s the case in your organization, you have an easy decision, which is to find a different organization.

And so, while I know that there are concerns around perception and all these different things, your practical reality is that you have to figure out how to build effective working relationships with the people that you work with.

And if your intent is to not only perform well in your job, but, in a sense, to have career mobility, if the people in the proverbial room don’t have any connectivity to you and don’t have any relationship with you, you have to be thoughtful in the way and the context in which you build those relationships, the ways in which you interact. But I think that there are reasonable ways to do that, that make sense and don’t hurt people reputationally.

There are women in organizations who have been successful that you can turn to for guidance, even if they’re outside of your specific organization. They’ve dealt with the very issue that you’re talking about.

And so what I would encourage women early in their careers to do is to ask the real tough questions. Don’t be bashful, don’t talk around it. Say, “Listen, here’s what I’m looking to do. I’ve got to build relationships, I need mentorship, I’m concerned about this. What do I have to think about from a perception basis? What’s the right way for me to interact?” Ask those questions. You’re not the first one who’s dealt with career advancement challenges. And so I think it’s a legitimate concern, but one that absolutely can be managed.

Op-Ed: Investors Have More to Do If They Really Want to Help Address Systemic Racism