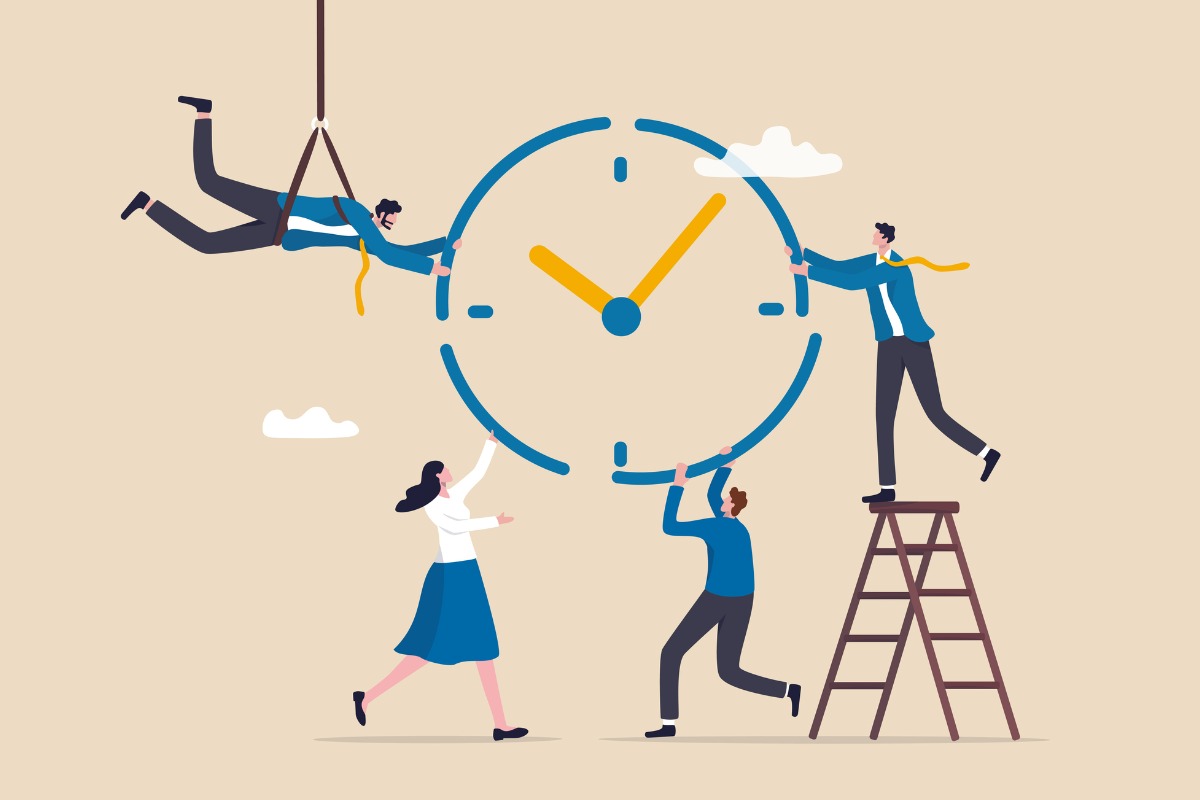 For years, allocators have added to private market investments because they had higher returns than listed equities and also came with a board-friendly, “smooth” return profile. Essentially, because these investments are not public, neither is their volatility. Private fund managers are also quick to note that to the extent volatility does happen during a holding period, it is not likely to impact exit prices or end returns all that much.

These axioms are so well trodden, there are academic papers on how these dynamics play out to the benefit of both allocators and managers. But as with everything, all of this only works until it doesn’t.

The COVID-19 pandemic started a regime shift in markets, and by the end of 2022, multiple cracks in institutional portfolios, which had been papered over by abundant liquidity and positive listed equities returns, were starting to show. As CIO noted in October, during the UK pension crisis, bond-heavy, LDI-driven portfolios were not the only weak links. Funds that had big positions in tech companies and private real estate were also under pressure. Pension funds that reported fiscal year-end returns in June reported performance numbers that flatly did not tell the whole story because of the standard lag in private fund manager reporting.

Then FTX happened. Investors from Ontario to Kansas to Singapore reported exposures and some saw significant write-downs. As we get through the first quarter of 2023, it is likely we will see even more negative results showing up in pension performance reporting.

According to a report by Pitchbook and the nonprofit National Venture Capital Association, VCs managed just 14 IPOs in the fourth quarter of 2022. Total exit value was $71.4 billion, the first time this figure has dipped below $100 billion since 2016.

We are not going to have much data on private equity performance in 4Q 2022 yet, but we can look to fund launches. Private equity funds have been on a tear in recent years, coming back to market with new funds—sometimes within months—aggregating assets from very willing allocators. That has all changed. In 2022, just 481 private equity funds launched, a 67% drop from 2021’s 1,464 fund launches, according to S&P Global Market Intelligence data. New investments are also coming with strings; UC Investments’ $4 billion allocation to the Blackstone Real Estate Income Trust comes with a waterfall structure that will allow UC Investments more favorable redemption terms based on a few conditions.

The overall pullback in new allocations and the push for waterfall terms is not a big surprise. Many institutional portfolios are dealing with the denominator effect, which means they are starting a new year already over-allocated to private funds. That, coupled with negative performance, would predictably slow any investment timeline. But slowing down enough? The slide in performance of existing investments points to the need for allocators to re-assess due diligence practices.

Temasek’s statement on its investment in FTX says as much. The investment team noted that it conducted a variety of diligence checks over eight months. “During this time, we reviewed FTX’s audited financial statement, which showed it to be profitable,” the statement said. “In addition, our due diligence efforts focused on the associated regulatory risk with crypto financial market service providers, particularly licensing and regulatory compliance (i.e. financial regulations, licensing, anti-money laundering Know Your Customer , sanctions) and cybersecurity. Advice from external legal and cybersecurity specialists in key jurisdictions was sought, with legal and regulatory review done for the investments.”

Still, those efforts, as well as qualitative reference checks on the company and the management team, did not reveal any of the myriad underlying issues at FTX. “We recognise that while our due diligence processes may mitigate certain risks, it is not practicable to eliminate all risks,” Temasek’s statement said.

As the statement shows, there are levels of due diligence. For many investors, what gets done depends on resources, but also interpersonal dynamics. Every investor, large or small, does a basic level of due diligence; it would be imprudent not to. But when resources are tight or opportunities are competitive, some investors may shy away from asking operational questions or may rely on other bigger investors to do the hard work, while they follow behind opting to confirm what is already known. However, as volatility increases and liquidity tightens, it becomes more important to dig deep and safeguard against risk.

It is not just underperformance that’s an issue. Sudden positive performance could also signal underlying risk, if it appears to be coming from sources that are not totally clear.

Victoria Vodolazschi, a senior investment consultant for hedge funds at WTW, calls this an “expanding galaxy of risk” and notes that in hedge funds, specifically, when there have been blowups, they can often be traced back to operational due diligence risk or strategy drift.

“Any time you’re introducing something new in the mix, you’re introducing new risk factors, and you have to assess that,” she says. “If you look at a year like 2022, and you look at fund performance, for example, and suddenly a fund is doing much better. If they can’t clearly explain why, that is that’s a red flag. You have to ask, ‘What’s new’? Why did this change? Not every change is a red flag, but if you can’t fully understand where something is coming from, that’s a problem.”

It may also be time for investors to consider whether the newer questions they are asking around environmental, social and governance issues are actually resulting in measurable answers.

An axiom of project management is that you can have something good, cheap or fast— pick two. This is also true for due diligence. An example of good due diligence might be Taylor Swift saying no to a deal with FTX. An example of cheap or fast might be the common practice among allocators of following the biggest investors or allocators into deals on the assumption those entities have done good due diligence. As FTX, Carvana, Invenia, Kraken, Fanatics or any one of a growing list of companies shows, that might not be a solid assumption.

Chris Pettia, head of private assets at consultancy SEI, says it is important for investors to be proactive instead of reactive. “In private markets, if something bad happens on July 1, you’re not going to see it start showing up in performance until September 1,” he says. “But you can ask questions before then. A lot of our clients watch the headlines closely, and often headline risk gets overblown, but it’s important to ask the questions and understand what is actually going on to the extent that you can.”

“The impact of related-party agreements [is not] always going to be totally clear if you’re looking purely at financials,” he explains. Taking a closer look at these arrangements can highlight risk before an investment has been made.

John Stiffler, senior managing director at FTI Consulting, agrees and adds that as bolt-on or tuck-in acquisitions become a big driver of returns for private equity managers, it is important for allocators to focus on what these deals actually mean. He says parties involved in a deal or an investment decision often don’t want to be seen as demanding, but not asking ahead of time means the risk will end up in a portfolio.

“There are a number of issues that arise when you have a platform-style company: You’re putting a bunch of systems together—technology, sales, product—and they may not work together. They could be antiquated,” he says. “Then you end up in an investment, and you realize you need a new ERP system at a cost of several million dollars or some other big-ticket item, and the original financial model for the deal doesn’t work.”

This is where the concept of smoothing is supposed to kick in. But that can get tricky with smaller companies, or midsize platforms that do not have a lot of margin to begin with and are now also facing tightening capital conditions, sources say.

Operational due diligence also adds cost and time to the due diligence process, and that can be a tough sell if the financials or performance track records look solid on paper. But Adam Bragar, head of U.S. private equity at WTW, notes that there are trade-offs with this approach.

“When markets are competitive, there is a lot of pressure on the timeline,” he says. “Deal teams are going to have a limited window of exclusivity. Allocators might have a limited window to make a decision and limited resources. There’s more risk if you’re looking at just the financials or you’re doing confirmatory due diligence.”

It’s not just the emergence of platforms or portfolios defined by bolt-on or tuck-in deals that makes operational due diligence more important; asset managers are also getting harder to assess. Most of the blurred lines are happening in private equity, where buyout firms are now also growth equity firms and also private credit firms. But it’s happening in hedge funds and mutual funds as well, as more of them invest in pre-IPO companies with the hope of a bigger upside as the companies mature.

“The risk is in the shift from asset management to asset aggregation: It dilutes the alignment of interest,” Pettia says. “The economics are in favor of the manager, and you can see it through the growth of continuation funds, which allow them to hold onto certain assets for longer. You also see it in the growth of GP stakes as an investment, because managers are incentivized to offer more and more products.”

Whether the focus is on financials or operations, due diligence often gets very model-centric, which can leave out the biggest X-factor in any decision: people.

When markets are moving fast and competition is steep, the fear of missing out can hit deal teams, managers and allocators. That can lead to a tilt toward confirmatory due diligence, rather than a deeper process as mentioned above. But this problem can also occur when markets are slower.

“We’ll see some investors engage in what is called ‘top-grading,’” Pettia explains. “They might add on to existing relationships that have done well, rather than making new allocations. Or they might swap out one fund for a fund they couldn’t get access to before and now can, because there is less competition. Those are often investments based on historical performance and brand name.”

This is a practice that can often work, but if negative performance is very recent, it might not always be clear at the time a new investment is made. Investors need to examine closely why some funds are now open if they were not before.

Vodolazschi notes that the emergence of issues like ESG or diversity, equity and inclusion also put new pressure on investors to include cultural elements in their due diligence. Investors with portfolio diversity goals or net-zero goals have to be willing to ask harder questions about how these goals will be met by asset managers. Failure to deal with sustainability issues, for example, could lead to trapped assets and future write-downs.

“These are all risk factors,” she says. “You have to answer the basic answers about a strategy or a team, “Will it work, does it scale, are they making good business decisions?’ But we’re also taking a closer look at what’s going on with the culture, ‘Do they have a diverse team? Are they looking at sustainability?’ If you’re planning to be a long-term investor these are important questions and often people don’t have the answers.”

Shiny Private Equity Loses Some of Its Luster

« Crypto Bloodbath Won’t Stop Spreading, as Some Lose the Right to Their Money