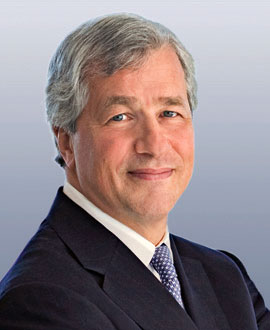 The heads of the largest and third-largest US banks agree on one thing: President Joe Biden’s proposed international minimum tax is a stinker.

Biden wants to impose a minimum 15% levy on US companies’ foreign income, to dissuade them from shunting their business overseas to lower-tax nations like Ireland. And he wants other countries to go for this minimum tax. Ireland charges 12.5%.

“America would be the only country, I think, in the world that would have what we call a global tax rate,” said Jamie Dimon, CEO of No. 1 JPMorgan Chase, in congressional testimony.

Why is it such a bad plan? “That will drive capital and, eventually, brains and R&D and investment overseas,” he said at a hearing of the House Financial Service Committee. “And that would be a mistake for America.”

Besides, asked Jane Fraser, the new chief at No. 3 Citigroup, what nations will go for this plan? She contended, at the hearing, that “it’s very hard to get other countries to sign on to an equivalent program despite some optimism.”

“I think that will be extremely difficult,” said Fraser, who took over the helm in March, “and, therefore, it could put the US in a position of being less competitive around the world.”

The administration argues that such a 15% floor would, in the long run, generate more tax revenue. This plan is indeed a tough sale to the likes of Germany and France, not to mention Ireland.

The present set-up, according to the White House, propels other countries to offer lower corporate rates to pursue foreign businesses, in particular US ones.

The president also wants to hike the US domestic corporate income tax rate to 28% from 21%, a level enacted under Donald Trump. The previous president had pulled that rate down from 35%.

The Biden push has prompted a lot of worry on Wall Street and Corporate America, which fear that lower profits and diminished international competitiveness would result.

The Biden idea is to raise as much revenue as possible for his infrastructure-building program, as well as to his campaign to add to scientific innovation and home health aides, plus creating 500,000 electric vehicle charging stations.

The Republican plan is more modest, a $928 billion proposal that sheers away the non-infra spending, and focuses on roads, bridges, and mass transit.

Overall, Biden’s tax framework would upgrade the IRS to improve tax collection, and hike the tax bills on the wealthy, especially for capital gains.

Dimon is especially fretful about the escalating federal outlays. In his recent letter to shareholders, the JPM chief worried that an escalating interest burden on federal debt would soon hit the market, which might help stoke inflation that would be “more than temporary.”

But he also expressed optimism that “the US economy will likely boom,” due to deficit spending, the infrastructure bill, vaccinations, and pent-up consumer savings looking for a post-pandemic outlet.

« Aon to Sell US Retirement and Retiree Health Businesses in $1.4 Billion Deal