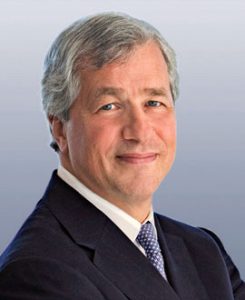 At issue is the cap that the 2017 GOP tax cut legislation imposed on how much could be deducted on federal returns. The provision put a $10,000 ceiling on SALT deductions.

Previously, the amount had been essentially unlimited. So if someone paid $80,000 in property taxes, that household could write off the whole amount from what it owed to the Internal Revenue Service. The idea of repealing the cap is to ease the impact of the Biden administration’s proposed federal tax hikes on the wealthy.

But Dimon, in his annual shareholder letter, slammed any move to lift the $10,000 ceiling as a gift to the well-off. In his words, five states—California, Connecticut, Illinois, New Jersey, and New York—“continue to fight for unlimited state and local tax deductions (because those five states reap 40% of the benefit) even though they are aware that over 80% of those deductions will accrue to people earning more than $339,000 a year.”

You might note that those five are Democratic controlled, high-tax states. In fact, the New York legislature just voted to hike state income taxes on the richest residents markedly, making the state’s rate the highest in the nation.

New York resident Dimon was one of a number of business leaders decrying the state’s action, which could be even more of a pinch given President Joe Biden’s plan to boost federal taxes on those earning more than $400,000 yearly. That’s where Dimon’s reference to $339,000 comes in.

The bank chief pointed to research showing that axing the SALT deduction limitation would overwhelmingly benefit the monied set. By the reckoning of the Tax Policy Center, more than 96% of the benefits of a SALT cap repeal’s benefits would go to the top 20% of earners.

What’s more, the research group estimated that 57% of the benefits would accrue to the top 1%, and a SALT cap repeal would present them with an average $31,000 tax reduction. The organization calculated that a repeal would cost Washington $80 billion yearly in tax receipts.

For Biden, the blast from an influential type like Dimon is no help. The president is trying to knit together his party, which has only a narrow congressional majority, to pass his next big initiative: a $2.3 trillion infrastructure package, which includes the federal tax increases. But the Biden plan does not mention a SALT ceiling abolition.

Some Democrats on Capitol Hill, such as Rep. Tom Suozzi of New York and Rep. Josh Gottheimer of New Jersey, have threatened to withhold their backing for the plan unless the SALT cap is abolished. Democratic governors from seven states (the five mentioned above, plus Oregon and Hawaii) wrote a letter to Biden last week asking him to ax the SALT write-off limit.

The White House thus far hasn’t said much about the SALT topic. At a news conference Monday, administration press secretary Jen Psaki said “this will be all part of the discussion.” Meanwhile, Biden’s planned tax increases haven’t had an bad effect on the stock market, at least up to now.